Tips For Buying A New Computer 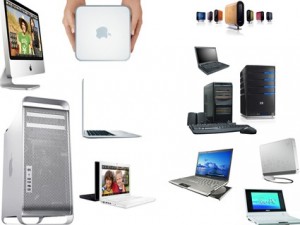 Understanding what the specs mean when ordering a computer allows you to compare apples to apples rather than going in blindly.  Not all sites will list detailed specs for their computer.  Sometimes I wonder if it done on purpose so they can sell mediocre computers and make them sound great.  Price is always a factor.  Something to keep in mind is 1,000 MB or MHz = 1 GB or GHz.

CPU is a good start for finding a computer that will work for you.  Single core, dual core, or quad core, what does that mean?  The more cores the processor has, theoretically, the faster it can process  whatever application you are running.  You will see CPU name like Intel Core  i7 IR or AMD Phenom II that I find that fairly meaningless.  The specs to look for are…

Note: You will get more CPU for the buck if you stick with AMD.  You are buying the name with Intel.  Some will say that Intel will work better than AMD.  If you are running high end video games, marginally Intel will be better, but for most peoples needs, it will make no difference.

If you looking to add more RAM to your existing computer the mother board will determine how big and what type of RAM you can put in it.  Even if you buy the wrong RAM, worst case scenario is that it will not fit or if it does fit and your mother board was not built for it you may hear a beep when you try to boot up and nothing will show up on your screen, no harm in trying. A few tips when purchasing RAM are…

Note:  Not all RAM are created equal, even if they have the same specs.  If you find RAM at a really good price, then that may mean it is a lower quality RAM which will affect performance.  Look at latency numbers when in doubt.

There are two main chip makers, Nvidia and Radeon, even though there are many manufacturers of video cards.  How much RAM is on the card will compare the same but the stream processors bench marks are measured differently from one another and cannot be compared straight across. Tips for purchasing videos cards are…

Hard drives will vary in size, RPM (rotations per minute), transfer rate, and seek time. Here are a few tips to compare your purchase…

Note: Most websites do not want to list the RPM or seek time.  Lower and medium models will just list how much it can store to make the computer look better. Ex: 300 GB hard drive, but they do not tell you it is a 5400 RPM hard drive which is on the low end.

If the website or store that you are wanting to buy your computer from does not list out the specs, than ask or go to a different website or store.  Lower end computers will have yesterday’s technology.

What to watch out for: The common tricks is to list a fast processor, but it will have DDR2 RAM and slow hard drive.  They will list 4GB’s RAM, but it is slower RAM like DDR2 or lower.  300 GB hard drive, but its 5400 RPM slow hard drive.  Lower end models will more than likely have integrated video which shares the RAM with the video and the CPU.  Video cards have their own RAM.  Cheap laptops and desktops are cheap for a reason, know what you are buying.  If it is too good to be true, it probably is.  They will always sell it for a profit.

I hope this helps you out.  A computer that does the job CAN cost less than $500. Please leave your questions or comments below!